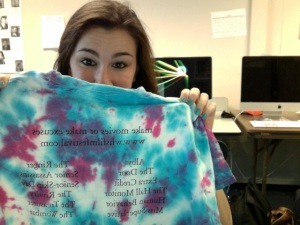 So we just found out the nominations last night. Unfortunately, Senior Assassins did not get any of the big three (editing, directing, or best picture.) This was a huge bummer to me, but our own Becky Chariton got nominations for Art Direction and Best Supporting Actor so we are pulling for her.

I was devastated last night, but there were really so many good movies this year. I was so impressed with everyone’s hard work and this year was unbelievable. As disappointing as it is, the film class and our crew knows that we put our hearts into this movie and that will have to be enough.

This year was such a learning process. Just several hours ago, Batchy herself told me that she thinks I was the most improved out of any of the film students from last year to this year. That is something that means a lot to me, because I have come leaps and bounds this year and that’s special.

I will never forget how I felt the moment I saw our movie. I was very proud, and I know the crew was too. An entire year of work going into a 25 minute block and then, all of a sudden, it’s done.

Becky and Darci, I love you guys. We were together from the beginning until the end and I will never forget this year. Thank you for being amazing actresses and art directors and just sharing the love of watermelon. Watermelon for life.

Mr. Alan, you changed my life so much with film and I will never fully be able to explain this positive change that occurred. Thank you.

Now all we can do is wait to see who is going to win. The movies were unreal, and the students who worked on them were even better. No matter what happens, the 11th year of film festival is definitely one to remember.

Even though I have to leave my career in film with a bitter taste, I am proud of what happened this year and I can’t forget how much work went into this movie. I hope you all enjoyed the movie as much as we did.

This is the end of my film fest career, and I won’t lie–I am holding back a few tears right now (as if I haven’t cried enough in the past few days because of film festival). But I am leaving behind an amazing high school memory that I will never forget.

For the last time,

1 thought on “Keep On Keeping On”